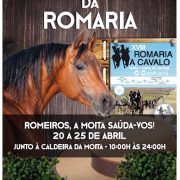 Departure from the pilgrimage on horseback Moita – Viana do Alentejo

It is already on April 25th, at 9:00 am, that hundreds of pilgrims, on horseback or in chariots, depart from the Moita village, towards to Viana do Alentejo integrated in the XVIII Pilgrimage on Horseback Moita – Viana do Alentejo, which ends on April 29.

For four days, the pilgrims will travel the 150km that separate these two counties, by dirt roads, by the old “Canada Real”, and it is expected to arrive in Viana do Alentejo on the afternoon of April 28. In spite of the religious character in its genesis, nowadays, Pilgrimage on Horseback takes on a more playful side, of socializing among the pilgrims, who travel from all over the country and abroad to participate in what is already considered the greatest equestrian event of its kind at the national level.

In order to receive, in a festivity atmosphere, the pilgrims who arrive at Moita’s village for the Horse Riding, Moita Council promotes the Pilgrimage festivity, between April 20th and 25th.

20:00h – Ceremony on horseback of the Pilgrimage Presentation

To obtain statements, interviews, or any other additional information, please contact:

Want to join the discussion?
Feel free to contribute!