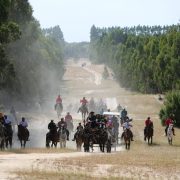 From the 24th to the 28th of April, hundreds of pilgrims from several parts of country maintain the tradition of participating in the 19th edition of the Pilgrimage on Horseback that connects the municipalities of Moita do Ribatejo to Viana do Alentejo. The arrival in Viana do Alentejo is estimated to be on Saturday the 27th, towards the end of the afternoon. The journey of around 150 km goes through the ancient “Canada Real”, best known as the “Road of the Spaniards”.

We should recall that the Pilgrimage on Horseback has been restarted in 2011, after a period of 70 years, intending to recuperate an ancient tradition of an event when the farmers of Moita do Ribatejo came with their stock and herds to the Sanctuary of Nossa Senhora d’Aires to ask the Virgin for protection for their animals and good harvests.

In 2011, the Pilgrimage on Horseback was awarded the prize Mais Alentejo in the category “Mais Tradição” (the best event related to tradition) and in 2013 it received a special mention in the category “Events” of the prizes “Turismo do Alentejo”.